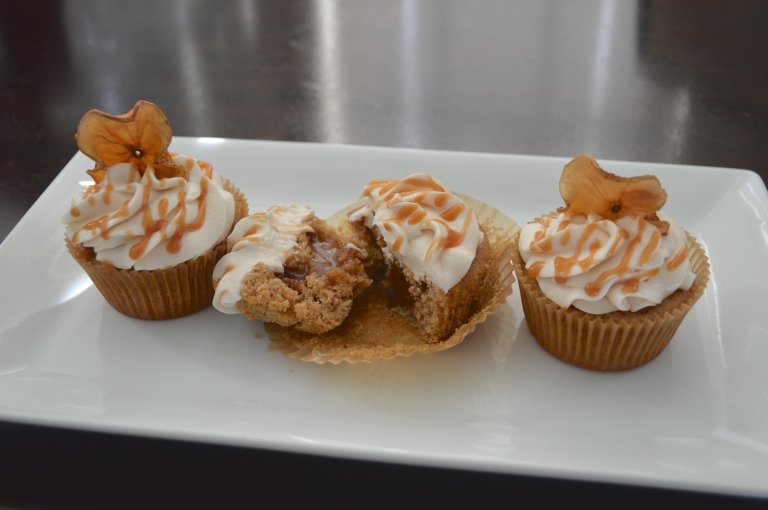 I am very excited to be finally bringing video recipes to the blog! As I mentioned in last weekend’s instalife post, I plan to try to post at least one video each month for some of the trickier tutorials. Today’s is a recipe I have been working on for a while and they are so perfect for fall! Apple cider cakes with fresh apples in the batter, a homemade caramel filling, swirled with a salted caramel buttercream… it doesn’t get much better than these bad boys. Below is the link to the YouTube video tutorial (just click on the photo to be taken to the site), make sure you watch in HD, just click the small gear in the bottom right hand corner and change to 720P! Also, subscribe to the YouTube Channel so that you’ll be the first to know about new videos when they are posted! The printable version of the recipe can be found below the link to the video! 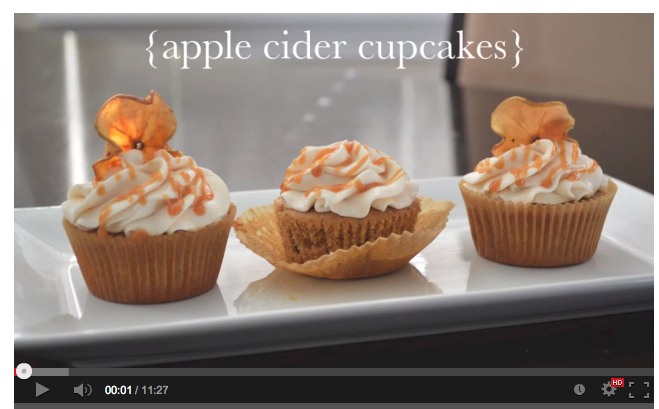 water and a pastry brush (for brushing down the pan)

For the Salted Buttercream Frosting:

For the Apple Chip Garnishes (optional):

Make the cakes: Preheat your oven to 325 degrees F and line 18 cups in muffin pans with 18 paper liners. Whisk the flour, baking powder, salt, cinnamon and nutmeg together in a large bowl and set aside. Cream the brown sugar and the butter together in the bowl of a stand mixer on medium speed for 3-4 minutes until light and fluffy. Add in the eggs, one at a time, beating well after each addition. Reduce the speed on the mixer to low and add in 1/3 of your dry ingredients, followed by 1/2 the apple cider, the second 1/3 of the dry ingredients, the last 1/2 of the apple cider and then the rest of the dry ingredients mixture. Do not over mix! Remove the bowl from the mixer and fold in the diced apple by hand. Fill the liners 2/3 of the way full and bake for 20-22 minutes until a toothpick inserted into the middle comes out clean. Cool in the pans for a few minutes on a wire rack, then take the cakes out of the pan and continue cooling on the wire racks.

Make the caramel: In a small saucepan over medium-high heat, add in the sugar, 2 tbsp of water and corn syrup.  Use a spatula to stir these occasionally until the sugar has dissolved (the granules of sugar will no longer be visible) and it slowly comes to a boil. Set the spatula aside now as the mixture will be too hot to stir, we’ll instead be swirling the pan to stir. Cook the mixture until it turns a dark amber color, brushing down the side of the pan with the brush dipped in water after each swirl to prevents crystals from forming. Remove it from the heat once it’s reached desired color and CAREFULLY (it will splatter up) add in butter, salt, vanilla and cream. Whisk until smooth, transfer to a bowl to cool completely and then transfer to a squeeze bottle, saving the rest for apples or ice cream!

Fill the cakes: Use a paring knife or a cupcake corer to hollow out small holes in the center of each cupcake. Fill these holes with the cooled caramel and then plug the holes by trimming the cores we removed in half and putting them in the holes.

Make the buttercream: Cream the butter and shortening together until well incorporated. Slowly add in the confectioner’s sugar until thick, then add in the caramel (remember to reserve the 2 tbsp!) and beat until light and fluffy. If too thick, scrape down the sides of the bowl and continue beating while adding 1 tbsp of milk at a time until smooth. If it’s too thin, add in more confectioner’s sugar until right consistency. Fill a large piping bag with a 1M sized tip with the buttercream, twisting the top and squeezing down to remove any air.

Frost the cupcakes: With a constant light pressure, squeeze the piping bag to start the frosting. Begin in the middle of the cake, continue around the outside and then work your way back to the middle. Press down slightly before lifting up the tip. Drizzle with the reserved caramel.

Make the garnish (optional): Slice the apple into 1/8″ thin slices and preheat your oven to 200 degrees F. Put the slices on baking sheets lined with silpats or parchment, brush with maple syrup and sprinkle with cinnamon and sugar. Bake for one hour, flip the slices and bake for 1 – 1.5 hours more until dried out. Stick in the frosting to garnish the cupcakes!