My Favorite Things in July 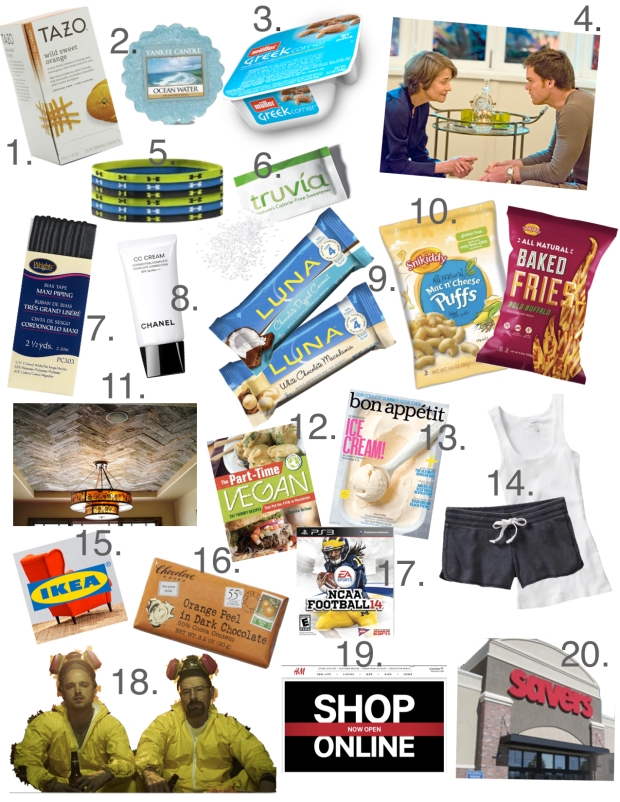 I thought it might be fun to try something new for today’s post, if you like it then let me know and I will do it at the beginning of each month. When I first came up with the idea I ran it by my husband as “a post with my favorite things from the past month… foods, fashion, magazines, books, design, anything that I’m currently really loving”. This was his response: 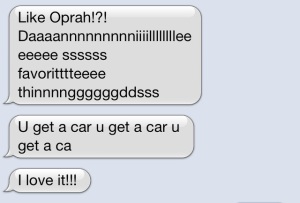 After I stopped laughing and thinking of THIS video, I thought I’d try it out and see what you thought! I’d also love to hear some things that you all are currently loving so leave them in the comments!

1. I love to drink tea every night a couple hours before bed and I used to just rotate between chai tea and apple cinnamon but I picked up THIS Tazo Wild Sweet Orange Tea and can’t get enough of it! It is SO citrusy and perfect for summer nights!

2. I have used Yankee Candle’s tart burners for as long as I can remember mostly because the smells for the fall are AMAZING!  We use them all year-round (we have plain white ones, find all designs HERE) and this last month my husband picked THIS scent tart which I’ve been loving! We stock up on the tarts whenever their having the $1 sale!

3. I’ve just started to jump on the Greek yogurt bandwagon (in an attempt to get more protein in my diet) and these Muller corners are my favorite. THIS flavor in particular is ridiculously good (though I like the blackberry & raspberry one too)… candied almonds in the thick yogurt it tastes like dessert! I know there’s lots of these flip style yogurts out right now but out of the many I’ve tried (the Chiobani ones are like soup!) these are by far the best!

4. Don’t even get me started on how good this last season of Dexter has been so far… because it’s been crazy! The first time they showed Dr. Vogel’s office I started swooning over the vintage bar cart (my husband makes fun of me that I notice stuff like that) and now every time they show it I drool a little! If you have an extra $1,260 laying around, you can buy it HERE.

5. I have been wearing these Under Armour elastic headbands since I was in high school and now that they’ve added the non-slip rubber to the insides, I love them even more.  When I first started wearing them they came in black or white, now they come in tons of colors and designs, see them HERE.

6. On a recent weekend my parent’s spent here visiting, my dad had me terrified to use splenda in my coffee (I’d been using it for years) because of all the links to cancer so he suggested trying Truvia (find it HERE). I went out and got a pack (which is admittedly a much more expensive alternative) and I am now obsessed with it. I put it in my coffee with a splash of soy milk and it’s now something I look forward to every morning!

7. In the two years that I have been sewing I had never using piping trim before! I used it to make sleep masks for my Etsy shop (find them HERE) and was like “how have I lived without this stuff?!”.

8. I was lucky enough to snag a bottle of THIS Chanel CC Cream when it first released at the beginning of July and I can’t even begin to tell you how much I love it. I hardly wore makeup before and now that I have this I wear it even less. Now I throw on some moisturizer, a little concealer under my eyes, this CC cream and that’s it! Unfortunately it is seriously sold out EVERYWHERE right now (and selling on amazon and eBay for ridiculous amounts) but once it’s restocked, do yourself a favor and get some!

9. On days when we go to the gym, I like to eat a little something but not a full meal so I tried THESE Luna Bars a few weeks ago for the first time. I love that they’re packed with protein and also nutrients  specifically for women’s needs, plus they actually taste good! The chocolate dipped coconut and white chocolate macadamia are my favorites!

10. We discovered THESE at the beginning of summer and can’t get enough. Finding snacks that satisfy your cravings but are still healthy and taste amazing are next to impossible but these definitely do the trick! The baked fries come in lots of flavors (the Bold Buffalo is my fave) and they also have these Mac n’ Cheese puffs that are heaven! They recently changed their packaging so the last time we went to the grocery story I was in an all-out panic that they were no longer selling them!

11. I was watching West End Salvage on HGTV a few weeks ago and they did a sunburst panel on a couple’s ceiling made from reclaimed wood that looked so cool. Since then I’ve seen the idea popping up and think it’s beautiful… I’m loving the idea of decorating areas most people don’t even think about!

12. THIS cookbook is really great. The whole gist of it is eating Vegan part of the time and this book is not only full of delicious recipes but I love how they break it down for you. We had a fantastic spinach and artichoke pesto from it the other night, see the recipe post HERE!

13. I wasn’t a Bon Appetit subscriber until a couple months ago and I am now kicking myself for not subscribing sooner. There are SO many things about the digital issues to love! The recipes are seriously incredible, the layout is so cool and I LOVE the way the recipe pages are set up. If you the look of a dish, you click on it to get the full recipe and then they also have a step-by-step version to where you “swipe as you go” making it really easy to follow along. Pair that with the ridiculously cool videos in the articles and the live tweeting they now have embedded in the issues, it’s by far the best magazine I’m subscribe to (which is a lot lol).

14. One of the benefits of working from home is that my “work attire” also happens to be the same as my gym attire, lol. I got THESE terry shorts in a few colors at the beginning of summer along with a bunch of the ribbed tanks (thanks mom for the Old Navy SuperCash!) and I seriously were them all the time. They’re really comfy, they wash well without shrinking and they come in so many colors you can make a ton of different combinations! Plus they’re on sale for just $6 a pair right now!!

15. Ikea released their new catalogue a couple weeks ago and after downloading it to my iPad (get the app HERE), I already have a list of hacks I want to try!

16. THIS chocolate bar is really cool. It’s dark chocolate with pieces of orange peel mixed in (they have many other flavors too) and I like to have a couple squares of it with my tea at night. As if a delicious bar of chocolate wasn’t good enough, each one of their bars also has a love poem printed on the inside of the wrappers which I think is really neat!

17. Every year for as long as I can remember, I would go at midnight and get the NCAA football game and now that the release date happens to correlate with my wedding anniversary we go together and get it as our “gifts”. This years had a lot of changes that took me a while to get used to but since EA’s licensing deal is up after this year I am loving it because it will never be the same!

18. My husband has been watching Breaking Bad for years and after catching bits and pieces of the first part of season 5 while he watched it last year, I was intrigued. I have started attempting to catch up in anticipation of the start of the second half of the last season and seriously love it! I’m currently at the beginning of season four and hoping to be all caught up by next week when the new episodes start airing.

19. I remember before we had an h&m (ours is still almost a 1/2 hour away) I was so frustrated that they didn’t have an online store! They finally opened one this past week and I’m loving it because even though we have one, they never have all the best stuff that they have online!

20. When we cleaned out the basement to make room for my sewing studio we literally had six carfuls of stuff to donate. We always donate all of our old stuff to a Saver’s near our house and that’s also where we find a lot of our cool little knick knacks.  We choose there to donate because I think it’s awesome that each location donates it’s profits to a different foundation. Our local one donates to the Epilepsy Foundation of Northeastern New York. Click HERE to find the one nearest you and see what foundation they support!

5 thoughts on “My Favorite Things in July”