How to Boil a Lobster & Remove the Meat 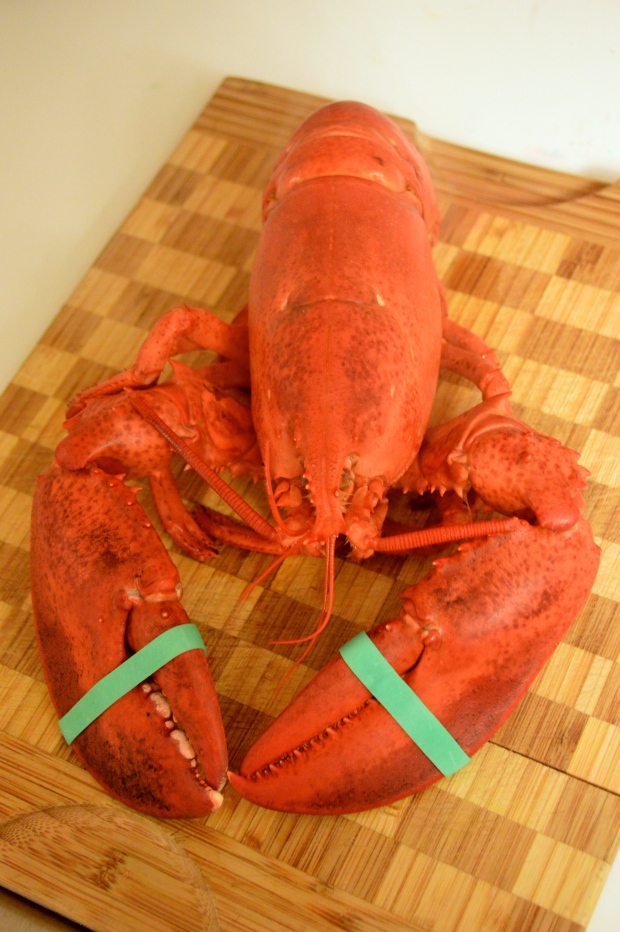 Things have been slightly insane here since I last posted, which is why so much time has passed in between! The painters came yesterday so we spend the whole weekend going through each room upstairs organizing, getting rid of what we no longer needed and then moving all of the furniture away from the walls. We went to Burlington, Ontario on Saturday to the Ikea for lots of furniture for the bedroom remodel. All of it is getting sanded down, painted, re-purposed and completely transformed so the new stuff is taking over the downstairs of the house. On top of all of that, my birthday was on Friday and I really wanted to just stay in and cook a fantastic dinner. I went back and forth on recipes and had finally decided on beer-batter fried fish tacos when along came this post in my inbox. Seriously, if you’ve never checked out the blog “1227 Foster you need to. He recently re-designed it to include a wider variety of topics and aside from how wonderful the site itself is, his pictures are phenomenal and I am always inspired each time he posts! Long story short, there was a quick blurb about his Three Cheese, Lobster and Bacon Conchigliette recipe and I immediately decided I wanted to make something similar for my birthday dinner. I’ve never eaten lobster other than at restaurants and even then it’s been few and far between but I decided that this year I want to seriously step it up in the kitchen. I decided to not just buy cooked lobster, but to go get a live one, learn to cook it and how to get the meat out. As a treat for waiting so long in between posts I’ll do this one showing you what I learned and then another one with a fantastic recipe to show you how to use it in a dish!

Start off by getting your live lobster. We got this HUGE one (over 2 pounds) from our local grocery store. They gave it to us in a plastic bag with handles, we just put that in a taller brown paper bag in the backseat while we made a couple other stops (we had to get champagne of course!) and then kept it in the sink while we got ready to cook (picture 1). Fill a large stockpot 3-quarters of the way with cold water and bring to a boil over high heat. Add a generous amount of salt, to match the brininess of the ocean, I added a 1/2 cup coarse kosher salt (2). Once the water is at a rolling boil, plunge the lobster into the pot head first (3) and cook uncovered until it turns bright red, which in this case took about 5 minutes but if you’re cooking more than one it could take anywhere from 8-14 minutes. Use metal tongs to remove the lobster and transfer it to a colander in the sink (4). Once it has cooled slightly, use a pair of kitchen shears to clip the very tip of each claw (5) and then hold it up to let all of the liquid drain out (6). 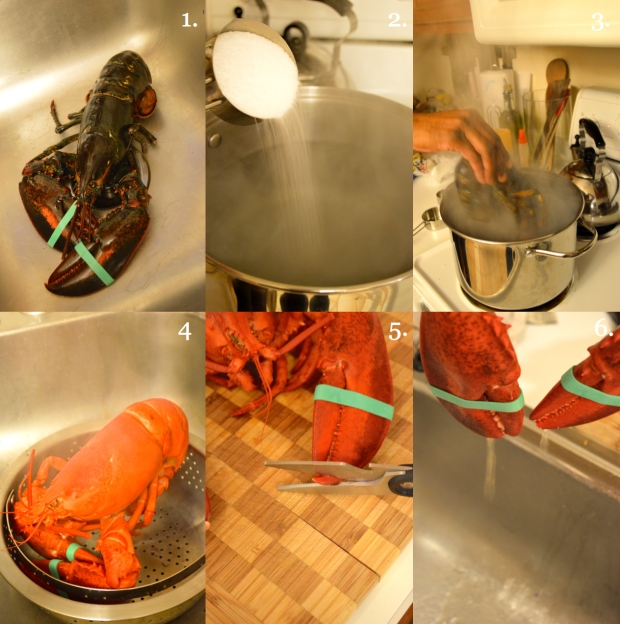 When you’re ready to remove the meat from the lobster, place it on a cutting board and make sure that you have a sharp knife, a pair of kitchen shears and a shell cracker (optional). Remove the rubber bands from the claws and discard. Twist the claws with their knuckles from the body to loosen (1) and then pull the claws from the body, completely separating (2). Grasp the head of the lobster and the tail (3) and twist the tail from the joint where it meets the body to separate it (4). Use the kitchen shears to slice down the center of the tail (5) then open the sides of the tail to release the tail meat (6). 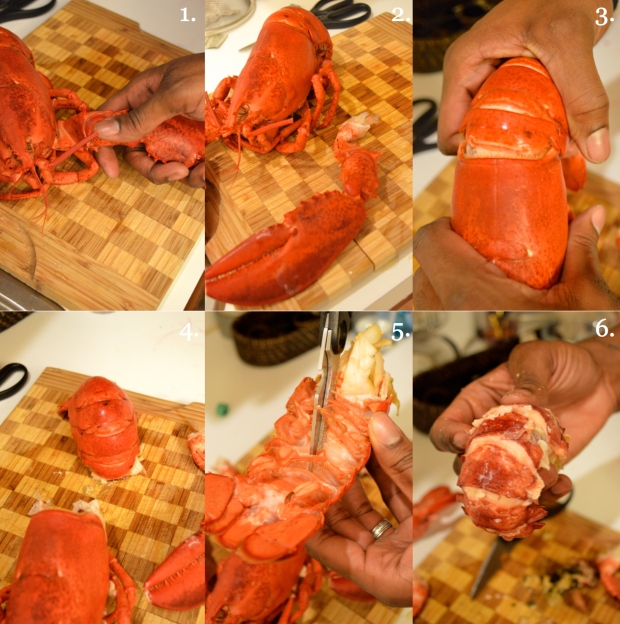 Separate the knuckles from the claws, and use your cracker (1) to open the shell and remove the meat (2). Grasp the thumb from the claw and bend it back to snap it off (3). Place the claw on its side on the cutting board and use the dull edge of a knife (4) to crack the claw’s shell without cutting the meat (5). Twist the shell open and remove the claw meat. Leave all the meat pieces as is and serve with clarified butter and lemon wedges or cut it into bite sized pieces (6) to use in other recipes. Be sure to keep the shell pieces and the head to make lobster stock! 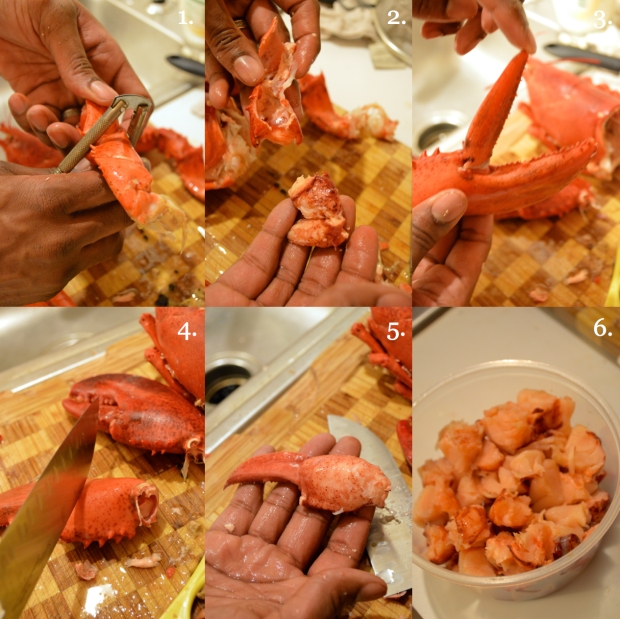 6 thoughts on “How to Boil a Lobster & Remove the Meat”