One of my favorite places in the world is the Fairchild Tropical Botanical Gardens in Coral Gables, Florida. Every time we go to Miami to visit my husband’s family, I spend hours on this breathtaking property and can never get enough. Aside from the beautiful flowers and plants, they also commission works of art that are scattered around the sprawling grounds. When we were there in 2010 for the Superbowl I was enamored with these giant pumpkins, flowers and ball shaped sculptures that were covered in polka dots and sitting in the water and grass. I took a million pictures and spent my afternoon just staring at them. It wasn’t until later that day, while at dinner with friends, that I learned all about the artist that created them: Yayoi Kusama. She’s a Tokyo born artist who moved to New York in the 50’s and was well known for her avant-garde style during the pop art era. She began hallucinating the dots, nets and flowers that are the focus of her art when she was little and she has lived in a mental institution by choice for the last 35 years. When I heard a few months ago that she was coming back to the states to collaborate with Louis Vuitton for a collection, the anticipation just about killed me! Working along side Marc Jacobs she came up with polka dot everything: purses, bracelets, scarves, sunglasses, shoes, etc. My favorite part of the installation at Fairchild’s was the enormous pumpkins, so subsequently the pumpkin charms and purse were my favorite from the collection. I was hoping to see the collaboration exhibit at the Whitney when we go to New York City in October but it closes a couple weeks before we get there. Since I don’t have the $7,500 to buy the tiny gold pumpkin charm, I decided to do this designer DIY to make a larger one for a shelf in our family room.

I started off by making an inspiration board that included some pictures from the collaboration as well as some of my pictures from Fairchild’s:

I was on the look out for a while for an artificial pumpkin that was a shape I liked, and settled on one from Joann Fabrics (also pictured is a smaller one that’s foam from a thrift store). Since it was red, I spray painted it with Krylon’s 24K Gold paint… start with the bottom of the pumpkin then once it’s dry set it upright and paint the top (I did two coats to minimize the paint from dripping). Next I took the smallest pouncer from this kit, dipped it in black acrylic paint and did a row of dots down the middle of each section of the pumpkin. 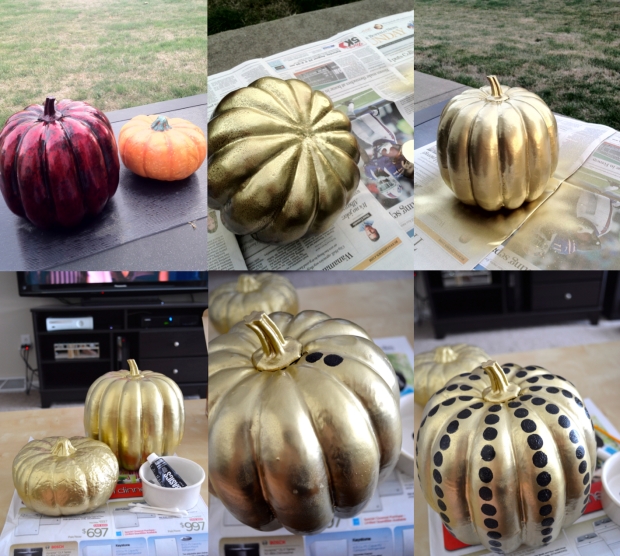 Next I took a really tiny paint brush and painted on dots along the indentations in the pumpkin. Next, I took a q-tip and painted two rows of dots on either side of the row of giant dots that I did at the beginning. Obviously you can play around with sizes of dots and you don’t have to do straight lines if you want to give the illusion of movement like Yayoi does. Once the whole thing was painted, I sealed it with Krylon’s Crystal Clear coat which is not only a gloss finish but a water-resistant covering.

If you like this project, I have added a more abstract looking one that is available for purchase in my Etsy shop: 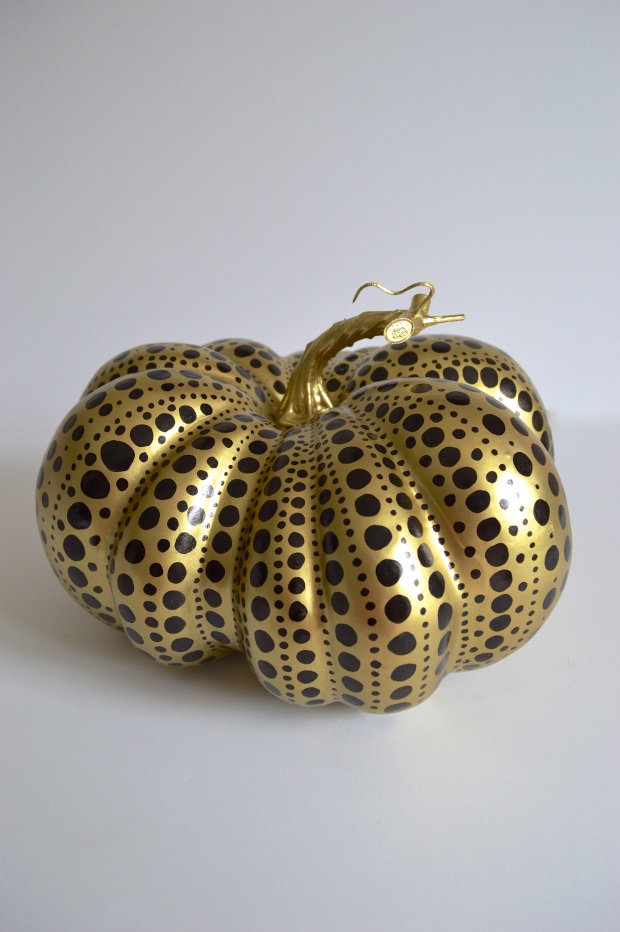