What I’ve noticed from going vegan in the summer time is that not all recipes are good for you just because they’re vegan. A lot go heavy on the oils and other fats to replace things that can’t be used. I follow this great blog called the Fat Free Vegan and what I love about it is that she doesn’t cook with any refined fats (oil, margarine or shortening). As I was looking back through some older recipes I stumbled upon this one, which contained one of the greatest finds ever for me… a dry roux!! A roux is the base for a lot of creole/cajun dishes and having made seafood gumbo many-a-times I was familiar with the normal process of making it which requires you to constantly whisk either oil or butter with flour FOREVER until it turns the perfect shade of brown. This then serves as the thickening agent in your gumbo later on. For this recipe, you obviously can’t use butter and she doesn’t use oil so she just dry cooked the flour and blended it with vegetable broth and voila! It wasn’t quite as good as a real roux but it was definitely delicious all things considered. Étouffée is a french word that translates to “smothered” and is usually a stew-like seafood dish made with crawfish and andouille sausage served over rice. This recipe takes out the seafood and uses soy sausages and is really delicious!

Start by making your dry roux: put 1/3 cup unbleached white flour in a small skillet over medium-high heat. Cook, stirring almost constantly, until it is the color of light brown sugar, about 15 minutes. Be really careful to stir because this will burn really easily. If it does burn, you’ll have to throw it out and start over unless you want your whole dish to taste like burnt flour. Once it’s the right color, transfer it to a blender with 2 cups vegetable broth. Blend until smooth and set aside. 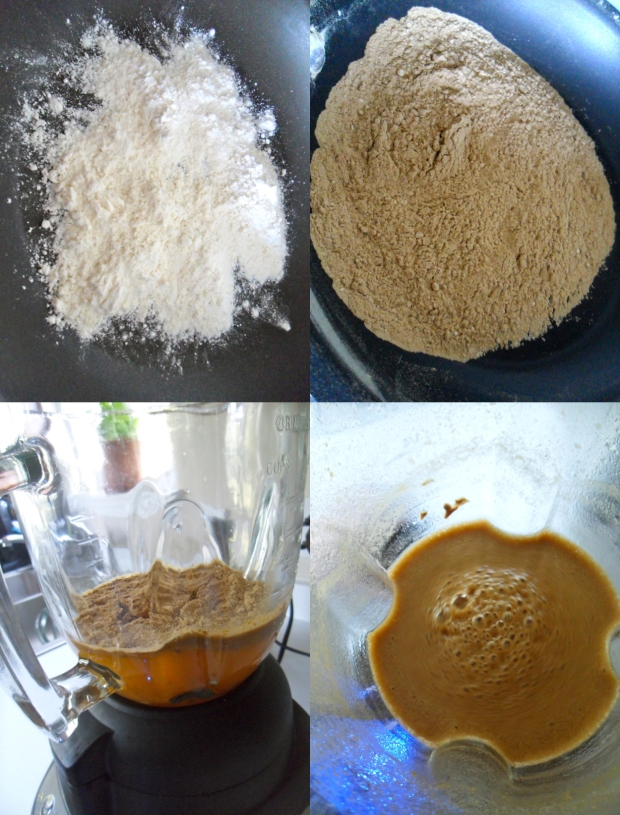 Heat a large skillet over medium heat and add 1 finely chopped white onion and cook for about 3 minutes. Add 3 ribs chopped celery and 1/2 chopped green bell pepper. Cook until the onion starts the brown and then add in 8 oz sliced mushrooms and a tbsp of water. Cover tightly and cook until the mushrooms start to exude their liquid, about 3 minutes. Add 4 minced garlic cloves and cook for one minute longer. Give the roux mixture another whirl in the blender and add it to the skillet. Add 1 tsp soy sauce, 1 tsp dried thyme, 1/2 tsp smoked paprika, 1/2 tsp cayenne pepper, 1/2 tsp black pepper, 1/2 tsp white pepper and 1/2 tsp dried basil. Cook for about 3 minutes until sauce has thickened. Reduce the heat and add in 14-16 oz sliced vegan sausages (Vegan sausage has a softer texture as it is and I found that just adding it in like this made it even softer… when I make this again I’ll crisp the slices in a skillet before adding them in this step). Cover and cook on low for 15 minutes. Stir in 4 sliced scallions. 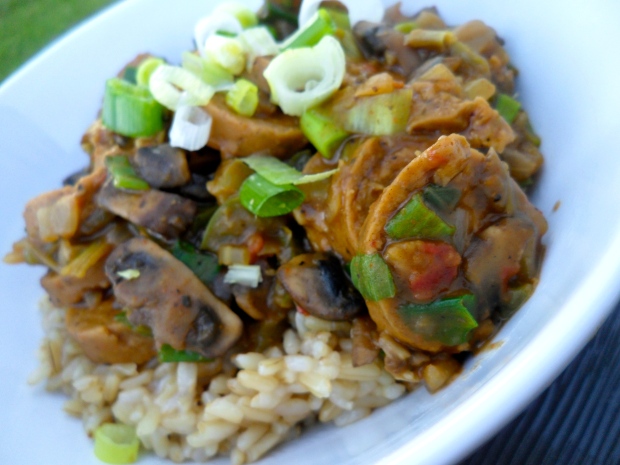 If you liked this recipe, check out the Vegan Recipes tab on the top menu to see many more!

One thought on “Vegan Sausage and Mushroom Étouffée”