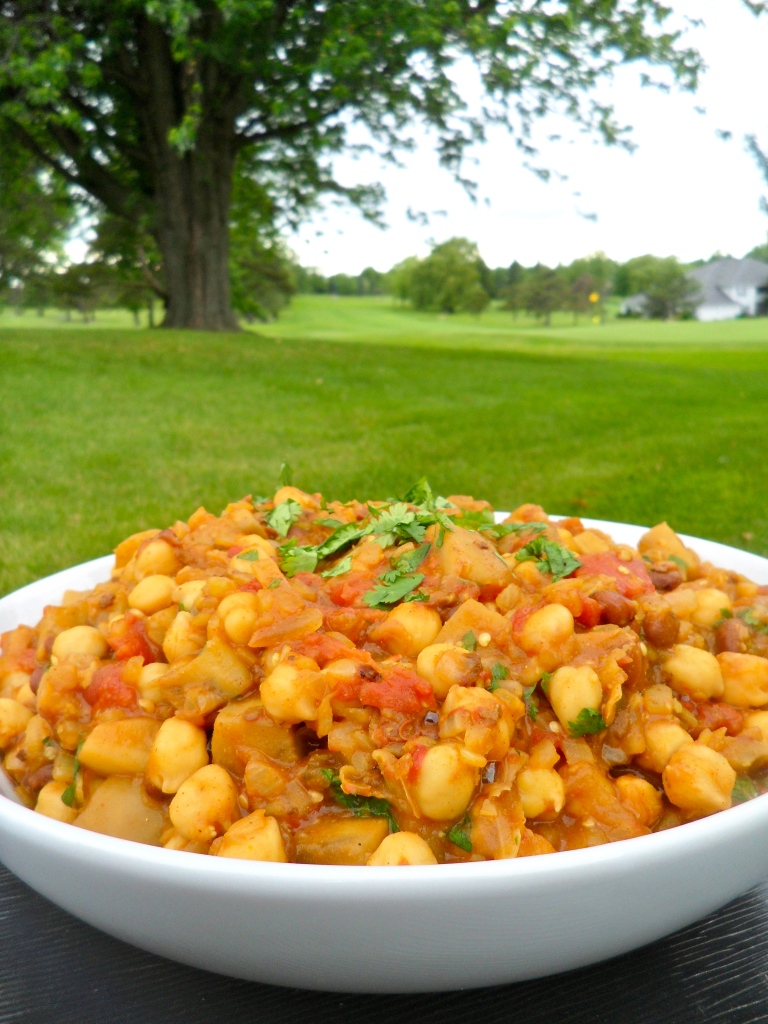 I go vegan every summer which means I cut out all animal products and by-products from my diet. Yes, this includes all the obvious things like meat and dairy but it also includes things people don’t necessarily think about like cheese, chocolate, some types of sugar, eggs, butter, honey, etc. I don’t do it for ethical reasons like most people do, instead I choose to do it for it’s health benefits. It a really hard thing to do but I absolutely love the way I feel when I do it! Don’t worry, my husband doesn’t do it with me and I don’t want to turn this into a vegan blog  so most of my recipes will remain “normal”. I’ve added a Vegan Recipes tab to the top to make it easier to find them and I’ll just make a note in the beginning of a recipe post if it’s vegan. Chana masala is an indian dish whose star is the chickpea but it’s given deep flavors with curry powder and cumin. The chunks of eggplant give it a great texture and since it uses canned beans and vegetarian chili it’s also really quick and convenient to make! This makes 6 servings.

Heat 2 tbsp olive oil in a large dutch oven over medium heat. Add 3 large roughly chopped onions, 5 minced garlic cloves, 2 tsp curry powder and 2 1/2 tsp cumin to the pot. Stirring often, cook until softened for approximately 5 minutes. Peel 2 eggplant (I used a sicilian type of eggplant thats typically called a graffiti eggplant. It still has the same mild tastes as a purple italian eggplant, but they’re only grown in the summer months and are larger in size) and then cut into small cubes. Add into pot and cook for 5 minutes more. Sometimes the eggplant will absorb a lot of the oil so you may need to add a little more. Drain a 28 ounce can of peeled tomatoes, chop them into smaller pieces and add them to the pot along with 2 (15 ounce) cans drained chickpeas and 1 can vegetarian chili.It will already be pretty thick, but reduce the heat to low and simmer for 20-30 minutes until it becomes a thick and stewy chana masala. Add in salt and pepper to taste and adjust any seasoning. Stir in a handful of chopped fresh cilantro and serve. 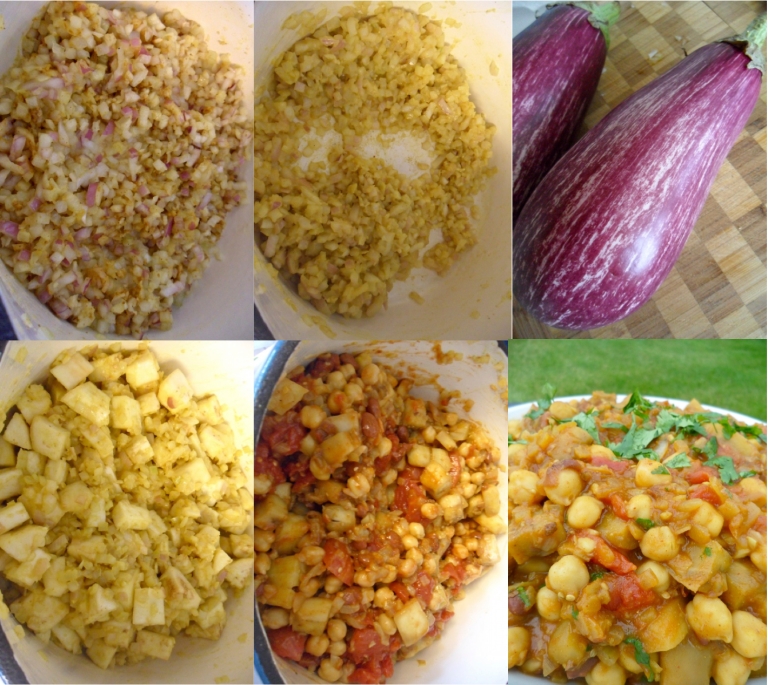 Some of my recipes that I’ve already done posts on are vegan as is, like the Farmer’s Market Gazpacho and the Soy & Rice Stuffed Cabbage. Others just need a little tweaking: the Black Bean and Rice Burger in this Veggie Burgers Post are vegan if you don’t make the yogurt sauce (the asian slaw is vegan too!), if you remove the egg from the Vegetable Pad Thai recipe it’s vegan, the Light Chickpea Curry with Basmati is a vegan dish if you leave off the Naan bread (it has traces of milk and egg) and if you replace the chicken stock with vegetable stock in the Tortilla Soup recipe it’s vegan too (obviously without the tacos).