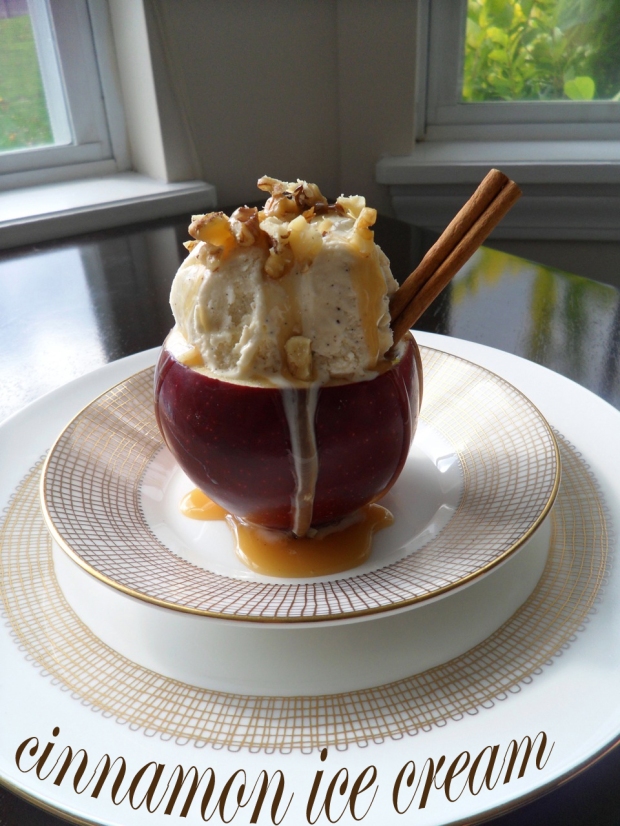 I started making my own ice cream a few years ago and nothing beats it for a number of reasons… it tastes better, you know exactly what is and isn’t in it, it’s a lot cheaper to make and it is so easy! I made this cinnamon ice cream to go along with the apple pie that I made last weekend and it was the PERFECT combination. I had some left over so one night this week I made caramel sauce, hollowed out some apples and served the ice cream in them with the sauce and walnuts on top (pictured to the left here)… they were incredible! A lot of people are intimidated by the thought of making their own ice cream but trust me, it couldn’t be any easier. You don’t need a fancy ice cream machine either… I know department stores sell them from $90 ranging all the way to $450, but I gotta tell you… I have a Hamilton Beach one that cost me $25 and it gets the job done just fine!

Cut a whole vanilla bean down the middle and use a knife to scrape the beans out. Heat 2 cups whole milk, 1 cup heavy cream and vanilla beans and pod in a medium saucepan over medium heat until bubbles begin to form around edges. Remove from heat, cover, and let cream mixture steep at room temperature for 1 hour. Prepare an ice-water bath. Uncover cream mixture, and reheat until hot but not boiling. Whisk 5 large egg yolks, 1/2 cup granulated sugar, 1 tsp ground cinnamon and a pinch of salt in a large bowl. Add hot cream mixture in a slow, steady stream, whisking constantly until well combined. Return mixture to saucepan, and stir constantly over medium heat until thick enough to coat the back of a spoon, about 8 minutes. (Do not let the mixture come to a simmer.) Strain mixture through a fine sieve into a bowl. Discard vanilla pod. Set the bowl in the ice-water bath. Let cool, stirring occasionally, until cold, about 20 minutes. Freeze mixture in ice cream maker according to manufacturer’s directions (It will more than double in volume when it’s done). Transfer to a large container, and freeze until firm.